In a nutshell under OECD directives every person must have a country of fiscal residency. If you already have one and cannot escape then you may not require fiscal residency. If it is an advantage for you ( and in most cases it is) or importantly you require a fiscal base then Andorra has obvious advantages.

They have informed me that this does NOT oblige the applicant to submit a tax return pursuant to requesting this fiscal residency certificate.

UPDATED SECTION DEC 2019 DELETED and the above continues to be correct.

What happens in the future is unknown, there are no current plans to increase or make any important changes to this new tax system. If changes are proposed or suggested I will of course post it here. AS POSTED ABOVE
For specific information on Andorra and the CFC/BEPS guidelines please refer to the company formation page.
What am I obliged to do as a passive resident? Andorra corporate tax and other explained - An Overview.
First and foremost Andorra has no inheritance tax nor wealth tax, no annual property taxes (other than standard local Comú community taxes) and no unexpected demands that can occur as in neighbouring countries.
For passive residents the Government is offering a fairly liberal choice, do you want to be a fiscal resident or not ? Remember, they kindly reduced the number of days you are required  to legally be here for residency from 183 days per year to just 90 days per year (in spite of vociferous complaints at the time by France and Spain).
Andorra Corporate tax if you decide to choose the company route is 10% on profits but with no further taxes at the personal level for dividend distribution. Due to the new global agreement on the minimum 15% tax rate for companies it is highly likely that at some point in the future this will apply to Andorra. There are no other intentions at this stage to increase other taxes.
So first and foremost decide if you are or are not wanting to become a fiscal resident, most passive residents will probably decide that they are not spending more than 183 days per year here, in this case you do not need to do anything. However IF you have a bank deposit or savings account the banks will automatically calculate the retention of 10% on interest and deduct from your interest payments. Now this only applies to savings accounts and not investment funds or any other accounts. If you wish to exercise your right to the first €3,000 tax free under the personal allowance you have to seek prior approval to the Bank. To do this you need to download the form 345 here, fill in the declaration that you do not expect to earn more than €3,000 in interest income and return to the bank. They will then not deduct the automatic 10%. (unless in their entity the € 3,000 ceiling is reached, in this day and age of low interest rates that is unlikely). Remember investment funds and other accounts are not affected). This tax on savings income affects you whether or not you you are at this stage a tax paying fiscal or a passive resident.
For practical purposes all residents automatically have a tax number, it is "F"  preceded by- 123456 X ( where those 6 figures and one letter are your residency number as on your residency card marked "Número identificació"). Most people have already been asked by foreign institutions for their "TIN" number. Andorra along with many other countries do not have a TIN number, but the equivalent as explained before should be used for any forms requesting such. More and more an actual fiscal certificate is being demanded additionally and this is not a problem to request whether or not you pay tax here. Logically if there is s further step it will be to produce the actual return which is the point when you may wish to submit an actual return !
You should decide if you actually need fiscal residency in a country such as Andorra with such a low tax rate since the goal of the OECD is for all financial institutions is to demand a fiscal residency somewhere.
If you are here in the tax net (kids at school, principle base etc.) then do some personal calculations and use the generous exemptions to the best advantage. Remember you are not going to have to list or prove anything in the returns, just figures, although as with any where an investigation later may require those supporting documents.
I can put you in contact with  lawyers and accountants who can advise professionally. I am unable to give individual and specific advice, but I can outline the principles for you.
I can help you to seek advice in your country of tax domicile to maximise the advantages of Andorran Residency
I am pleased to say that I have teamed up with a UK based but International team of experts who are in a position to advise you on matters that may concern you in your country of tax domicile, wherever that may be, when considering a relocation to Andorra. This will be done on a free and without obligation introductory chat with an advisor to find the best way for you  to take advantage of potentially minimal  income tax regime of passive residency in Andorra. Whether you are concerned about or wish to legally avoid paying company taxes, income taxes, VAT or the setting up offshore companies, trusts etc, this website is a one stop service to advising you and putting theory into practice, and without obligation.

So If I declare that I am a Fiscal resident what taxes am I looking at in Andorra? 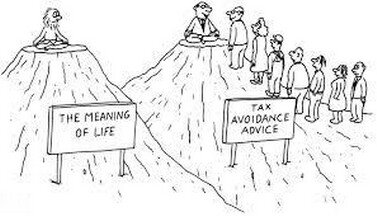 2019 sees the third year of IRPF  tax declarations in Andorra. There have been no significant changes since the implementation that would affect passive residents except that it is the banks who are policing the international obligations for each person to have a country of a fiscal residency. If you are applying for an account in Andorra you now need that proof.

With this in mind what is the position for passive residents?

So what is the law on IRPF ?

There are two types of taxation: there is general or earned income which includes (not exhaustively):
·       Income from employment (wages, salaries, pensions, etc.)
·       Income from the exercise of financial activities (self-employed and professionals, company administrators, property rentals, etc.)
And there is Savings or Capital Gains income which includes (not exhaustively):
·       Income from investment capital (interest, dividends)
·       Capital gains and losses arising from transfers of all kinds of assets (except when the transfer is expressly classified as returns from investment capital)

How is General Income taxed?

Taxation on income from employment in Andorra is not going to affect passive residents, however there may be areas concerning pensions, salaries from employment of companies overseas, and rental income from property wherever it be situated.
Please note once again the effect of the no double taxation doctrine under the IRPF in that those earning salaries or pensions which are taxed at source in their country of tax domicile will most likely pay no tax in Andorra.
For salaried employees in Andorra the CASS (Andorran Social Security system) is responsible for monitoring liability and making appropriate retentions.

How is income from savings taxed?

This category includes, amongst others, interest earned on loans, current accounts or bank deposits, also returns (premiums, coupons, etc.) arising from  the  subscription, reimbursement, repayment, conversion, exchange or transfer of financial instruments, private or public. This is not a tax on the amount of capital it is on the profits arising therefrom at 10% over the personal allowance.
It should be noted that bank investment funds in Andorra for those passive residents who invest to fulfill residency requirements under Category A should largely be unaffected since return on investment funds through the bank are already subject to existing taxes, however those with simple savings accounts for example will still be liable.
Please note for this type of bank savings tax there is a further personal allowance of € 3,000 separate from the main personal allowances as below and at current interest rate returns any tax liability should amount to little. Please note that the tax here is on interest earned, it is not a tax on the capital amount.

Dividends from Andorran entities and also from Andorran Collective Investment Funds (CIFs) are exempt from Personal Income Tax. This means that those with Andorran Companies once the profits have been declared and paid under the Company tax law will not be then subject to IRPF upon dividend distribution.
Dividends from companies not resident in Andorra may be subject to Personal Income Tax (however, subject again to exemption under the double taxation rule of a third country)

The gains obtained from the transfer of equity or shares of a company in which the holding is more than 25% will pay tax under Personal Income Tax. However, if the holding in the company is less than 25% or, when higher and has been under the same ownership for 10 years or more, the capital gains will be exempt from Personal Income Tax. This rule also applies to the sale of holdings in CIFs. For those sole traders this is good news in that profits derived do not fall under IRPF since the shares traded would amount to a fraction of the entity traded.
The same applies for property held overseas. In most countries capital gains is paid where the property is situated and in that case under the doctrine of no double taxation there should be no tax payable in Andorra. This is different in the UK for example where those “non-resident for tax purposes” are not currently liable for capital gains tax in the UK. In which case if they have held the property for less than 10 years under the IRPF regulations they may be liable for capital gains on any capital increase.

A summary of personal allowances for General Income:

Single person:
Married or legally constituted couples:
There is some further relief for dependents, incapacitated dependents and mortgages.

A summary of personal allowances for Savings Income:

For all residents there is a € 3,000 allowance for interest earned on savings. It is understood though that the bank will automatically retain this tax from € 0, 00 unless the tax payer applies to the Bank for exemption.
There remains no inheritance tax and all assets bequeathed are not subject to IRPF. There is also no wealth tax on assets such as exists in Spain or France to name but a few.

What does the future have in store?

As for passive residents there continues to be a fundamental issue in that after paying a non interest bearing bond and making a significant investment in the country and then being required to pay income tax on worldwide earnings leads to the question as to what they should get in return? Currently they are not offered any medical assistance, requiring private medical insurance nor are they entitled to any pension amongst other things. This in essence may amount to discrimination and contrary to the constitution as any tax payer in any country is entitled to benefits by right.
This article contains general information about legal and financial matters.  The information is general advice and opinion, and should not be regarded as professional advice or opinion.
Back to content